skip to main | skip to sidebar

be the tiger, not the zebra

"how are you jmac? what's been going on in your life?"

"oh nothing, nothing. nothing has changed. everything is the same. i really have nothing to say. it's all so boring and mundane. now tell me about you. i am dying to hear." she says softly in that mild unaffected southern drawl of hers.

i love my jmac. hanging out with her is like an easy sunday morning. soft cotton candy. easy peasy. smooth whiskey. a delight. her personage unassuming. her demeanor attentive and present. "oh me? little ole me? i am so boring. let's hear about you!" and talk you do. about yourself. your life. your problems. and listen? she does. well.

what i love about the jmac is that change abounds but it is an imperceptible, subtle, shifting change rather than the sort of chaotic chop chop change that i seem to put myself through.

in the few years i have had the privilege of knowing her she has created and was granted a copyright for the monster tee shirts. have you seen t-shirts with felt sewn onto the front to form cute, tactile, furry and fun monsters? that's because they knocked off jmac's designs. during her time running dishy duds i swear she has creatively sewn together more impossible fabrics into funky, fun new designs than anyone else i know. tonight my son is wearing some king kong pj's of her doing right now. giant 3 inch orange buttons adorn the neckline and turquoise knee patches pull out the flecks of blue that contrast perfectly with that orange.

but, she's not by nature a clothing designer. nope, she received her masters in ergonomics. and not just simple ergonomics. she went and earned some fancy specialized ergonomics degree. with it she went into factories and set up people who sewed mattresses or splayed fish or spun nuts on how to do it without incurring permanent injuries. and from there she went and started her own consulting business.

she had two boys but found herself wanting a girl. and as a planner she began to consider adoption. she began a voracious reading frenzy about africa. she began campaigning about the horrors occurring in darfur. she sent them monies her small business earned. and then, 3.5 years ago she flew out to ethiopia and adopted a baby girl.

during the economic downturn her husband, who was the bread and butter man, lost his job. she met him in a factory in the south. he was that hot manager. she was the young, nubile ergonomist in a factory comprised mostly of males that employed assembly lines to manufacture their cars or trucks or something metal and massive. the affair was sizzling.

i look at pictures of jmac in her wedding garb with the long white train flowing behind her, her blonde locks spilling down her shoulders and i can smell the magnolias and the heavy alabama moisture hovering in the air around her, barely moving in and out and around her. she made a fantastically perfect bride.

she was hired by a nameless corporation and gave up her clothing design business, participating in craft shows, sewing, talking about her craft to make money. and each time i saw her she would say "oh you know, same old same old. nothing new for me to tell. just making sure everyone has their gel pad properly placed. sigh."

so this past friday when we gathered for taco night and and those crafty ladies were lining up their perfectly concocted tequila sunrises in glass mason jars with slices of lime scooched up just this way and that on the side rims; well it was of no surprise that after not have seen her for a month she once again reports that there is nothing, absolutely nothing of interest going on in her life. "come on ladies, let's hear about ya'll." 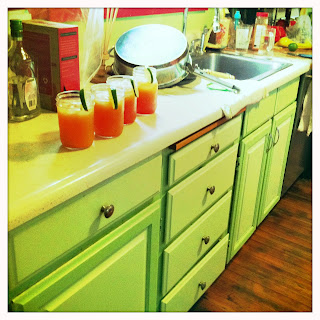 uh huh. so we talk and talk and eat and drink. crazy diesel thief across the way whose rig is specially crafted to siphon tons of diesel from slumbering truckers. an end to crocheted hats. kids. haircuts. halloween costumes. skirts. this and that. schools. boyfriends and husbands and dating. craft shows. friend drama. rats and rabbits. richard and horror films. a new shirt jmac's been sewing out for jen n.

and then it's getting later. we are all sitting on the floor near jen's piano, the big kids are singing crazy songs in the basement on jen and trent's karoke machine. the voices merge with the sounds of connect four pieces being released and spilling onto a table top by the smaller children.

"well i have to take off too. i am so tired. been getting up so i can get to work by 6 am to help manage all the construction workers. you know, motivate, inspire them."

what? i ask. what construction workers. what are you hell are you talking about jmac?

"well you know they are building like crazy out there so sometimes in the early morning before they start, i will go to the tent and give an inspirational sort of speech. i stand up in front of oh, around 1200 construction workers and talk about some safety topic."

"yes, well all that building that is going on and so many teams of crews. so before my last speech i had seen some pbs on baboons and stress. it was really quite interesting. you see most creatures in the wild experience high, intense levels of stress but the stress is short lived; either the creature escapes and whew or dies and whew. but there is release from that stress from either outcome. while we humans, our stressors like mortgages, bills, traffic jams, unpleasant bosses are long lived so our bodies and brains are continually coated in these stress created hormones which wreak havoc on the body. so i went for the inspirational speech on how to cope with daily stress."

you give inspirational talks to 1200 stressed out males? i ask astounded.

"yes. and because i had just seen that pbs special i somehow managed to end that particular speech with the line "be the tiger, not the zebra."

we all started laughing hysterically. half of us were drunk. actually i think everyone was drunk except me. but, regardless, it was exceptionally funny. either jen or rebecca piped up "but jmac, don't tigers live in china and zebra's in africa?"

"as i was walking off the stage someone whispered to me "hey, you know tigers live in asia and zebra's are from africa, right?" of course i hadn't really thought about it but duh and of course the line developed a life of it's own and followed me wherever i went. turned into a bit of a company tagline. and it was asked that posters be created with this imagery on it."

Oh My GOD NOOooooo we all screamed deliriously and at this point we really were delirious.

"it gets better ladies" jmac stated in her understated way.

"i was responsible for approving the posters that were to go out and i received some graphics from some designer and they looked just fine to me. a tiger chasing down a zebra with the line don't be the zebra, be the tiger so i gave it my approval and they went into print. and of course after i approved it a coworker walked my desk and said "you didn't approve that image, did you jennifer?" well why not i asked? "look at it! look at what the tiger is doing to that zebra" and sure enough staring me right in the face! if that tiger wasn't nearly standing upright on it's rear haunches, reaching it's giant paw out and touching that zebra's ass. crap."

there is no way i can describe the point that all four of us ladies had reached in our shared giggling fit but let's just say the image of fish out of water, spastic bodies flip flopping, lips pursing in and out, gasping for air does come to mind.

we need that poster jmac. we want that poster. we chanted. we demanded.

"well, unfortunately nameless corporation banned them. they were removed from all work sites and are no more. the only thing i have left is the graphic."

and after we had all calmed down a bit we each agreed that this story would not be forgotten. we sat in a circle, held out our pinkies, joined them together and swore that we would never, ever let jmac forget that there was always something she could share with us about her life.